Pepsi and Dapper Dan had unveiled a way for the average football fan and fashion aficionados to blend their two loves together with the release of a capsule collection. The Football Watching Capsule Collection has been out on the market for a few months now.

According to a statement from Dapper Dan,"I've been bringing luxury fashion to Harlem for 35 years and let me tell you, you don't always see a true authentic collaboration come to life the way it did here with Pepsi, and right in time for the football season and New York Fashion Week at that. This capsule collection is equally inspired by the Pepsi brand, football fans, and my one-of-a-kind looks. Fashion and football have never come together like this before. Athleisure has a new name on the block, and it's Pepsi x Dapper Dan." 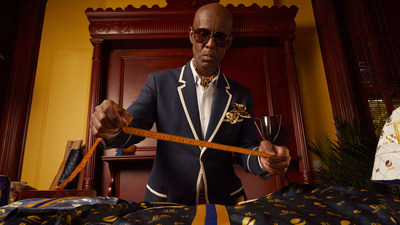 "With this year's NFL season kicking off at the same time as New York Fashion Week: The Shows, we thought it was the perfect opportunity to celebrate the football watching experience with some fashionable yet comfortable loungewear, perfect for game day on the couch," said Todd Kaplan, VP of Marketing – Pepsi. "While Pepsi has always had deep roots in pop culture and football, we have never brought it all together like we have with The Pepsi x Dapper Dan Football Watching Capsule Collection. Dapper Dan's unique style of merging luxury fashion and streetwear is so bold and unapologetic – just like the Pepsi brand – so we thought he was the perfect partner to blend his visionary taste in streetwear with football fandom in the unique way only he can do."

About the Pepsi "Made for Football Watching" CampaignA few weeks ago, the Pepsi "Made for Football Watching" campaign returned, giving all football watchers permission (and encouragement) to choose their love of the game over all else. In its second year, the campaign celebrates loyal football fans and inspires them to gear up (literally) for a season of hours upon hours of prime NFL binge watching. Along with the return of national TV spots, this year's program debuted "Football Is Calling," new digital content featuring Billions star and Breaking Bad alum David Costabile, alongside a new program that gave fans a chance to score NFLShop.com merch and exclusive prizes – all to take their watch parties and football marathons to the next level.

About PepsiCoPepsiCo products are enjoyed by consumers more than one billion times a day in more than 200 countries and territories around the world. PepsiCo generated more than $70 billion in net revenue in 2020, driven by a complementary food and beverage portfolio that includes Frito-Lay, Gatorade, Pepsi-Cola, Quaker Tropicana, and SodaStream. PepsiCo's product portfolio includes a wide range of enjoyable foods and beverages, including 23 brands that generate more than $1 billion each in estimated annual retail sales. Guiding PepsiCo is our vision to Be the Global Leader in Convenient Foods and Beverages by Winning with Purpose. "Winning with Purpose" reflects our ambition to win sustainably in the marketplace and embed purpose into all aspects of our business strategy and brands.  For more information, visit www.pepsico.com.

About Dapper DanWith his eponymous store on 125th Street, Dapper Dan pioneered streetwear in the early 1980s, co-opting luxury branding to design original garments with high-end detail. Known for using exquisite leathers, furs, and other fine materials, he first drew powerful New York City hustlers as clientele, who all came due to his strong street reputation as a legendary professional gambler and dandy.

He then went on to outfit entertainers and other celebrities, including Eric B. & Rakim, LL Cool J, Salt-N -Pepa, Mike Tyson, Missy Elliott, JAY -Z, Beyoncé, Aaliyah, P. Diddy, Floyd Mayweather, and many more. Dapper Dan has been featured on platforms including The New York Times, Elle, Vogue, W, Vanity Fair, The New Yorker, CNN, and Netflix. His works have been on display at The Smithsonian, The Museum at FIT, The Metropolitan Museum of Art, and The Museum of Modern Art.