﻿In an interview with Harper's Bazaar, 'House of Gucci' costume designer Janty Yates discusses the research done regarding the fashion and wardrobe of the film. 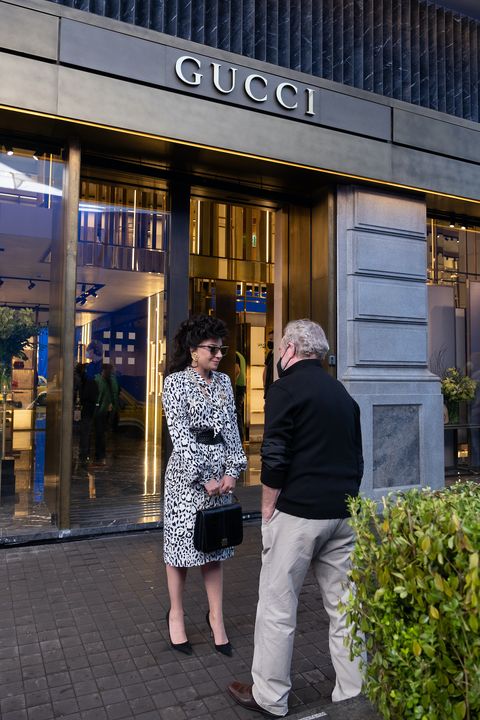 When asked to discuss the research done for the film, Yates said, "I went to the Gucci Museum in Florence, and it was the best thing ever. They have costumes back to the '70s in there. They have pictures of men making shoes and bags in the '40s and '50s, all the portraits of the family, so I took four million photos and collated them into these enormous files. There were also characters in the script we needed to research specifically, like Marlon Brando. I compiled all of this research and sent it to Ridley—and it was the first time I ever got an email back from the president of MGM saying, 'Well done.'"

When asked if Yate's used any archived pieces from the Gucci brand, the designer said, "We hardly touched them. They were in a strong room at our hotel under lock and key and guard the whole time. We only ended up using two in the film—when we see Lady Gaga in a Double G tunic and trousers with leather trim on 42nd Street finding cheap fakes, and when she's in a Double G silk blouse and leather skirt when she receives her divorce papers." 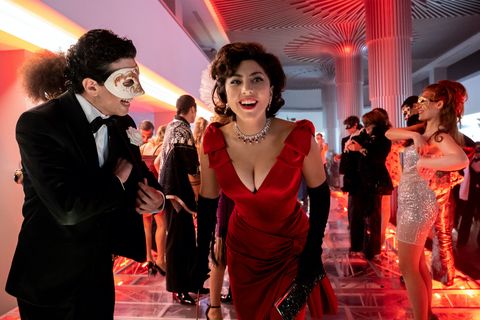 When asked about Patrizia's costumes and if replicas of what she actually wore were taken into account, Yates said, "It's a hodgepodge of things. I was able to raid several of the archives in Italy and build up a few rails of vintage YSL and Dior. Patrizia didn't dress in much Gucci at all. We took two or three looks from Patrizia's real archive. There's a pink evening dress we translated into red satin for the first meeting with Maurizio. We also changed her wedding dress. We had narrowed it down to two and decided which one she would wear on the day. We had the traditional wedding dress from the photos, but the one we selected was much cuter. The one we selected was glorious and showed her calves, and was covered in gorgeous lace all sewn by hand. The dress Patrizia actually wore was very simple, Gucci, but with a high neck and sleeves, and just wasn't very exciting. It was very 'convent.'"