In an interview with Esquire, creative director of the Brooks Brothers clothing brand, Michael Bastian, talks of his role within the company and more. 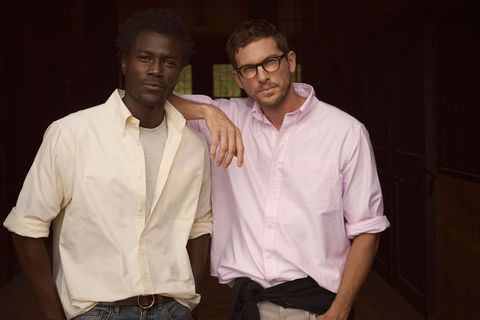 Bastian was asked how he identified with the Brooks Brothers brand before he took on the role of creative director, to which he said, "One thing that I realized once I jumped into this job was a big part of why I started my own collection was to make those things that I couldn't find at Brooks Brothers anymore. I had been wearing Brooks Brothers pretty much my whole life. One thing that had frustrated me with Brooks Brothers is you think it should never change, that you should be able to walk in the front door and reliably find an oxford-cloth button-down, Bengal-stripe button-down, a peacoat, a chino, a five-pocket cord, on and on and on. Those fundamental icons of the brand should always be there. And somehow, over time, some of those icons either got eroded or dropped along the wayside or modified. So the first thing I wanted to do was, just put all the bones back into the brand—not reinvent the wheel, but get all the spokes back in the wheel. Because it's a brand that people are super vocal about and super passionate about, and I think the way forward for Brooks Brothers is to really own all of those icons, all of the things that people expect to find in a Brooks Brothers. So really my first job is just rebuilding the house a little bit, if that makes sense."

When asked about the overarching theme and connection between the brand's sportswear and tailoring, Bastian said, "I think the overarching thing with anything Brooks Brothers, it’s always is going to be classic, heritage, American. It’s not going to be overly branded. There's not logos all over the place. Where we do play around is with color, pattern, mixing—the magic is all in how you put it together. I like to think it’s kind of perfect basics in a way that allow you to really play around with your own personal style. It's hard to play around with clothes that are overly branded or specific or fashiony. It's hard to twist that around to your own style. You need slightly more neutral things to really let your style shine through. So that, to me, is going to always be it: really great quality, but at the end of the day, it’s classic, American, heritage, preppy, optimistic—there's a lot of buzzwords that we think about. But, when I'm designing, we always step back and say, does it feel like Brooks Brothers? It's got that intangible, Yeah, this feels like Brooks Brothers to me."