Jewelry designer Brent Neale Winston and For Future Reference have partnered together to cofound a $50,000 endowment at the Fashion Institute of Technology (FIT). The endowment is meant to create a system of scholarships and mentorships for black students of FIT in need of support.

It's called the Art Smith Memorial Scholarship Fund, named after one of the leading modernist jewelers of the mid-20th century, black jewelry designer Art Smith.

The writing on the foundation's landing page reads: “People of color are historically underrepresented in the jewelry industry and our goal is to turn that statistic around—with your help—one student at a time,” reads the foundation’s landing page. “We stand with the black community and with all victims of racism. We will continue investing our time, energy and  to support communities that have been historically marginalized, and we will increase our efforts to fight for the systemic changes that are so urgently needed.” 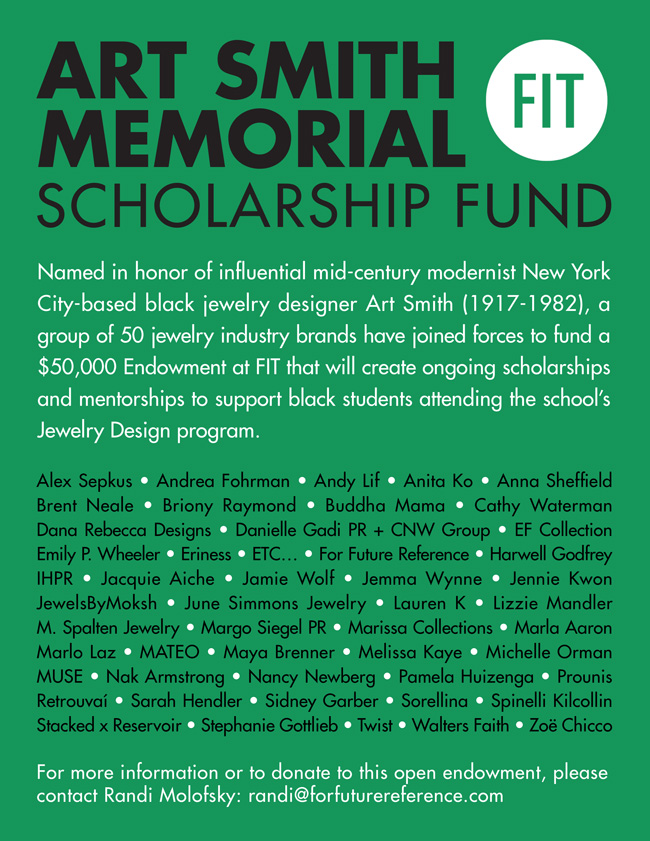 Brent Neale Winston wrote his announcement on Instagram captioning with: "Every time I go to write this I trip over my own words....but here goes. As I’ve been listening I’ve been thinking about the industry I’m in - Fine . We need more POC voices. How can I help that happen? What’s something  and lasting? What if we as an industry could establish an endowment at @fitnyc that would create ongoing  and mentorships to support black students attending the Jewelry Design program. As it turns out we can and did. We are so proud to announce alongside 49 jewelry industry brands the Art Smith Memorial Scholarship Foundation. Named in honor of influential mid-century modernist New York City-based black jewelry designer Art Smith. This group have joined forces to fund a $50,000 Endowment at FIT that will create ongoing scholarships and mentorships to support black students attending the Jewelry Design program. People of color are historically underrepresented in the jewelry industry and our goal is to turn that statistic around — one student at a time. The Endowment is now off the ground and is open for additional donations of any amount, so please contact us directly if you’d like to contribute. As it grows so will the ability to give back to even more students. Love, Brent."